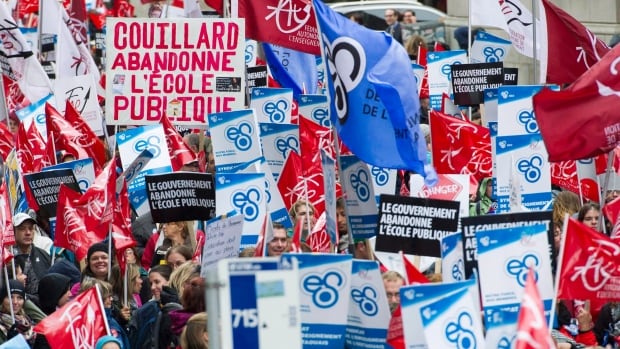 Every Monday, I like to take a look at important stories which got gobbled up by the vicious ever-moving news cycle. Typically, these are one-off events, official announcements which get overlooked or trends which don’t get reported on.

But today, I’d like to look at a major, ongoing, and extremely newsworthy event which is barely making an impact in the national consciousness.

I follow Canadian politics and activism pretty darn closely, if I do say so myself. So I was shocked to discover a few days ago that there have been massive union-organized demonstrations and widespread strike actions against austerity in Quebec since mid-October without my hearing a single word about it.

It’s a story that’s been barely reported outside of Quebec, and yet it holds out promise and potential to the anti-austerity movement everywhere in Canada and across the globe.

Today, teachers across Montreal and Laval, along with other public sector workers, struck against government contract proposals that would cut pay for teachers, nurses, and other public sector workers while simultaneously raising the age of retirement and increasing the workload (by, for instance, increasing the number of students per classroom or nurses per patient), thus guaranteeing a decreased quality of service for every member of the public who accesses these services.

Today’s strike actions were the third such round of rotating strikes, which have affected multiple cities across the province.

The culmination of this agitation, failing an eleventh-hour agreement with an intransigent provincial government, will be a three-day general strike by nearly half a million workers on the first three days of December.

For a fantastic summary of the actions to date, and the trajectory of this struggle, check out this thorough summary in Socialist Worker. The article suffers a little for being written by an American – for instance, it conflates Quebec’s Liberal Party with the Liberal Party of Canada, when in fact the Quebecois Liberals are far more closely related to the federal Conservatives, and their most recent leader was floated as a potential leader of the CPC – but overall its analysis and level of detail is impeccable.

Perhaps the most important aspect for me is the participation of the Association pour une solidarité syndicale étudiante (ASSÉ), the main driving force behind the wildly popular and successful student strikes of 2012. The failure of the student and labour movements to join forces during the printemps érable is, in my humble opinion, a major lost opportunity for fostering a broad-based anti-austerity pro-worker coalition, and the fact that they are quite likely going to be joining forces now is cause for incredible excitement.

On November 5, ASSÉ staged a one-day student strike of 52,000 and led a mass march through Montreal of several thousand students. They rallied behind the slogan: “We Know We Are Not Alone: For a Massive Reinvestment in Public Services.”

They are fighting to stop $70 million in cuts to higher education and are instead demanding that the government tax the rich, invest in the public sector and guarantee good-paying jobs that provide services to the broader working class and students. “Students are suffering both directly and indirectly from the government’s austerity agenda,” ASSÉ spokesperson Hind Fazzazi said. “We have to stand in solidarity with the unions in their fight because it is also our fight.”

Importantly, union leaders lent their solidarity to the protest. In his speech at the rally, the FAE’s [Fédération autonome de l’eseignement] Sylvain Mallette declared, “We support students because they are fighting the same battle we do as teachers, to protect public services and have more money for education.”

This kind of broad-based working-class-plus coalition against austerity reminded me of a fantastic must-read piece I read earlier this year, “A Path to Victory Against Austerity in Ontario?” (which I highlighted in an post in relation to the environmental movement).

The article’s author, Steve D’Arcy, uses the historical example of the Ontario Days of Action campaign of the Mike Harris years in the 1990s to argue that nothing less than a widespread, serious, and well-organized disruption is required to attack the current austerity regime:

The disruptiveness we need can never be generated from within marginal activist enclaves, mobilizing a few dozen people here, a few hundred there. No, we need tens of thousands, indeed hundreds of thousands of people, coordinated across the public and private sectors, drawing in unionized and non-unionized workers, taking inspiration and in many cases leadership from Indigenous communities, and committing to serious, large-scale economic disruption: shutting down highways, schools, universities, public transportation systems, private and public sector workplaces, and inflicting real costs on the employer class and its underlings (regardless of party affiliation) in government.

Specifically, D’Arcy advocates for bottom-up grassroots mobilization within unions and communities to achieve such an end – precisely the kind of structure that ASSÉ employed to such great impact during the 2012 student strike, and which union militants in organization like Lutte Commone (Common Struggle) are pushing during the present union confrontation with the Quebec government.

The fact that such a confrontational union action is taking place in what is certainly the most politically repressive province in Confederation is no coincidence. After years of draconian totalitarian crackdown on popular dissent, the people of Quebec have had enough and are willing to go to extremes to ensure that their voices are heard.

It’s been over forty years since the last general strike in Quebec – which was a truly radical movement that has been glossed over and erased from Canadian history, and is well worth learning about.

The general strike of 1972 ended with repressive back-to-work legislation, massive legal retaliation against rank-and-file union members, and a subsequent weakening of unions’ rights to collective bargaining, as well as the imprisonment of several prominent union leaders. Seriously. Their imprisonment was ultimately ended when a grassroots spontaneous general strike resumed in multiple industrial areas throughout Quebec, pressuring the government to reverse the worst of their repression.

What is vitally required today is a strong and durable sense of solidarity similar to the one that was witness in ’72.

The plain and simple truth is that austerity has always been within our power to defeat. All that is required is organization and determination.

Solidarity with the workers of Quebec! Here’s hoping they show the rest of us lazy Canadians the path towards victory and a more just society.

ICYMI Monday is a weekly examination of newsworthy stories that failed to win the news cycle and were thus doomed to oblivion. You can reach me by emailing me at matt@thealfalfafield.com or by leaving a comment below.