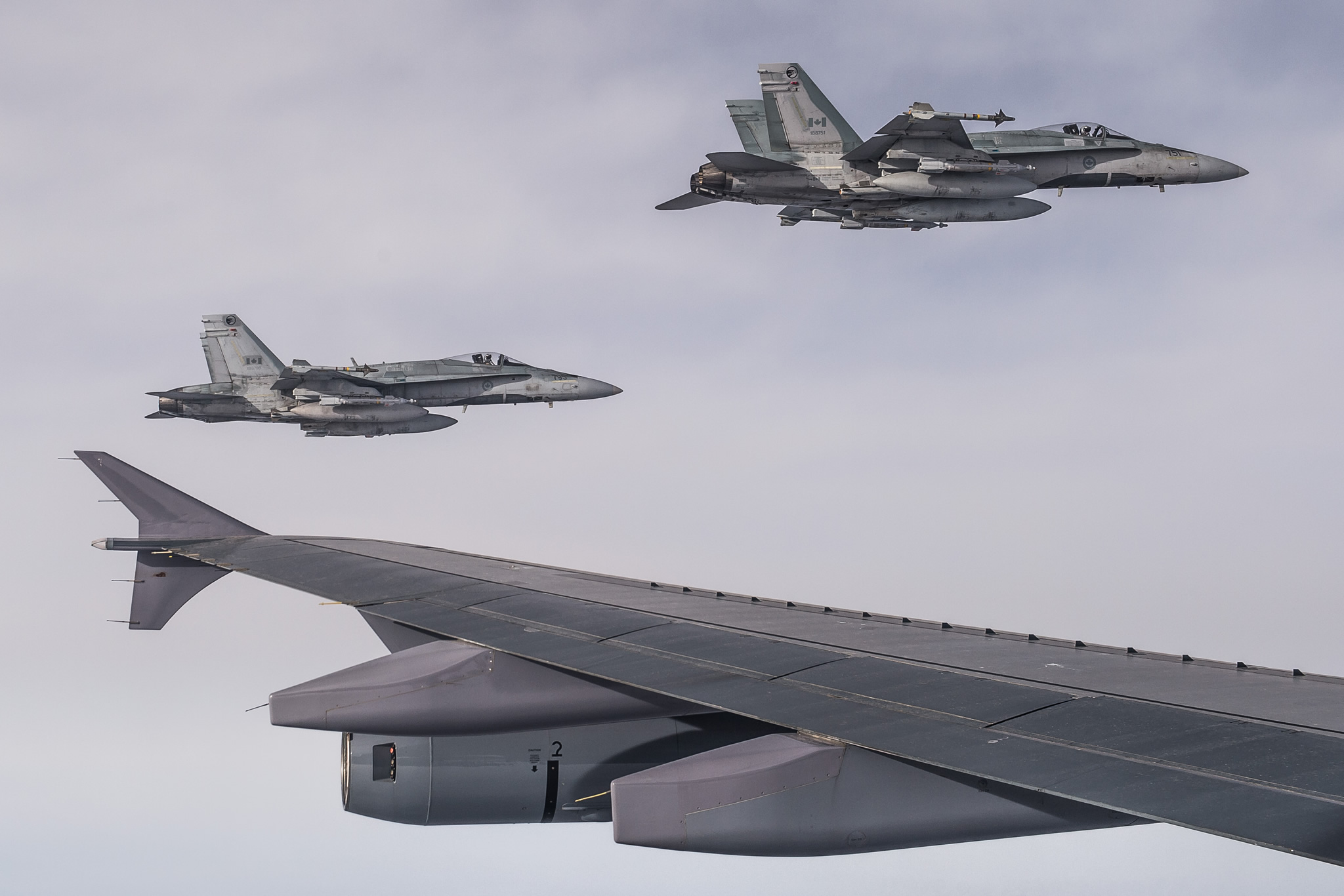 Since last October, Canada’s air force has been involved in a coalition of Western and Gulf Arab nations bombing Islamic State positions in Iraq and, later, in Syria. In addition, Canadian Special Forces have been deployed to Iraqi Kurdistan to train the Kurdish peshmerga, who are fighting IS on the ground.

Throughout the past year, media coverage of the conflict has been extremely sporadic and patchy. This is largely by necessity; the military has not exactly prioritized keeping the public informed, especially when it comes to scandalous and controversial events, like the lone Canadian death in the conflict, that of Andrew Dorion, who was killed in what has been described as a “friendly fire incident” this past March. Details of Dorion’s death have remained pretty fuzzy, and the Department of National Defence has so far refused to release a thorough report investigating the incident.

Similarly, DND has remained tight-lipped about ongoing rumours and reports of civilian casualties as a result of Canadian airstrikes. This past week, an investigation by CBC’s the fifth estate revealed that Canada and its coalition partners have been implicated in the deaths of up to six hundred civilians, including at least two airstrikes in which Canadian bombers were specifically involved.

The military brass had little to say on the incident, except that the mission’s commander was not even aware of an internal Pentagon investigation into one of the incidents. Canada continues to insist that our bombers have killed absolutely no civilians with the nearly five hundred bombs they’ve dropped on Syria and Iraq to date.

Given the military’s intransigence and the horrific on-the-ground conditions, it’s difficult for the press to dig much deeper into these allegations, or indeed to report concretely on the state of the conflict.

Of course, we know broadly speaking that Islamic State is still right where it was a year ago, and that airstrikes seem to have been largely ineffective. There’s been some speculation that the coalition of bombing nations isn’t actually all that enthusiastic about defeating IS, and is not bombing them as often or as vigorously as it would be if it were serious about this. (I looked at one specific example of that in my article “The ISIS racket“.)

Rhetorically, we know that the justifications for Canada’s involvement in this conflict have shifted over the past year. As the Chronicle-Herald wrote after the fall of Ramadi this past May:

During his usual spin-o-rama, Defence Minister Jason Kenney commented to the media that the Ramadi setback was essentially “no biggie.” It is Kenney’s depth of experience in such martial affairs that in war, you often suffer a setback (or two). The problem with Kenney’s current rosy assessment is that it in no way jibes with his previous comments regarding ISIS.

When the decision was made at the end of March to extend the mission in Iraq and expand it into Syria, Canadians were told that this was necessary because of the allied air force’s success against ISIS. We were told that ISIS losses in Iraq had forced them to withdraw their heavy equipment into Syria and hence, if we were to continue to take the fight to the enemy, we needed to chase him into his hiding place.

Well, it turns out that ISIS is not hiding after all. They are on the offensive in Syria as well, having just captured Palmyra, and with the securing of Ramadi, they are very much on their front foot in Iraq.

What we have instead is a lot of speculation, albeit well-informed speculation.

So, for instance, there has been a lot of speculation as to the nature of the relationship between Western militaries and intelligence agencies on the one hand and the Islamic State on the other. A hard-hitting piece by Seymour Hersh in the London Review of Books in April and a Guardian report in June played a major role in dragging this line of speculation out of the alternative/fringe/conspiracy-theory press and into the mainstream. Both pieces detail how MI6 and the CIA funnelled weapons from Libya into Syria and provided training to a variety of radical Islamist rebel groups, and the Guardian’s piece looks at internal Pentagon documents from 2012 discussing (with cautious approval) the possibility of an Islamic state emerging from the whole mess:

Raising the “possibility of establishing a declared or undeclared Salafist principality”, the Pentagon report goes on, “this is exactly what the supporting powers to the opposition want, in order to isolate the Syrian regime, which is considered the strategic depth of the Shia expansion (Iraq and Iran)”.

Which is pretty well exactly what happened two years later. The report isn’t a policy document. It’s heavily redacted and there are ambiguities in the language. But the implications are clear enough. A year into the Syrian rebellion, the US and its allies weren’t only supporting and arming an opposition they knew to be dominated by extreme sectarian groups; they were prepared to countenance the creation of some sort of “Islamic state” – despite the “grave danger” to Iraq’s unity – as a Sunni buffer to weaken Syria.

That doesn’t mean the US created Isis, of course, though some of its Gulf allies certainly played a role in it – as the US vice-president, Joe Biden, acknowledged last year. But there was no al-Qaida in Iraq until the US and Britain invaded. And the US has certainly exploited the existence of Isis against other forces in the region as part of a wider drive to maintain western control.

And of course, the United States has a long history of doing exactly that – training and arming local radicals to keep their enemies internally divided. One need look no further than Al-Qaeda, which was essentially a creation of the CIA in 1970s Afghanistan that took on the Soviets, or the Contras, a US-funded-and-armed right-wing terrorist group in 1980s Nicaragua that took on the socialist Sandanista government.

All of which makes the anti-IS coalition’s dual mission of bombing and training look a little bit suspicious. Even if one assumes that this time around the U.S. and its allies are acting in good faith (not bloody likely, but for the sake of argument let’s just assume), it’s difficult to see how their stated strategy could possibly lead to success by any measure. More well-armed rival factions on the ground are not going to end this conflict, not even with Western air support.

Of course, Canada’s role in the bombing of Islamic State is apparently in its final days. Prime Minister Justin Trudeau made it quite clear during the recent election that he intended to withdraw Canada’s air force from the region, although he was adamant that he intended to double down on the parallel training mission in Iraqi Kurdistan by Canadian special forces:

Experts say there are a number of unanswered questions about Trudeau’s plan for Iraq and Syria, including when the jets will return home and whether the new government will withdraw all Canadian warplanes or only the fighter jets. But most believe the special forces mission will get a boost.

“There will not solely be 69 people in a training capacity, and that’s it,” said defence analyst David Perry of the Canadian Global Affairs Institute. “They will be enhancing the training mission.”

Trudeau himself has signalled an expansion of the special forces mission on numerous occasions. Earlier this year, for example, he said Canada should be “building on” the training already underway. His party’s election platform says a Liberal government would “refocus” on training local Iraqi forces.

But will they stay in Iraq?

Meanwhile, on Friday, President Barack Obama for the first time authorized sending U.S. soldiers into Syria to help train and assist rebels fighting the Islamic State (ISIL). About 50 special operations troops will be based in Kurdish territory to work with local forces, the White House said, though more could soon follow…

While most of the experts [military experts interviewed by the Citizen for this article] believed Washington would try to pressure Trudeau into making some new commitment in Iraq, they were split on whether it would ask Canada to send trainers into Syria. But adding troops in Iraq, at least, would free up U.S. trainers for Syria.

Now, to be clear – our current involvement in bombing Syria is blatantly illegal under international law, which is to say it is a war crime. There is also literally no reason to think that the training and arming of yet more rebel groups in Syria is going to in any way contribute to a termination of the vicious proxy war ravaging that nation. The very fact that this is even a possibility that may be under consideration is preposterous.

Hopefully, the incoming Trudeau government will learn some lessons about a major international incident that DND and the Canadian Forces managed to keep successfully under wraps during the dying days of Stephen Harper’s reign. The Ottawa Citizen’s David Pugliese broke this story just hours ago, so the full details are likely yet to emerge, but at all appearances it’s a doozy:

The Iraqis said they held the Canadian Forces Hercules transport aircraft, carrying supplies into Kurdistan without authorization, for four days.

Some Iraqis are concerned that the Kurds, who ultimately want independence for their territory, will use the support and weapons they are receiving from the U.S.-led coalition to eventually break away.

And other Iraqi lawmakers and military commanders claim that the U.S. and its allies have secretly armed the Islamic State (ISIL) in order to keep the country in chaos.

This incident occurred on October 28th, with the Iraqis holding the jet for four days before allowing it to return, cargo intact, to the airbase in Kuwait from which it had come. The Iranian press got a hold of the story initially, and DND (reluctantly) confirmed it to the Citizen today.

See what a tangled web we weave? Trudeau and his team quite likely embraced the idea of training because it seemed technical and straightforward and unobjectionable, but in actual practice, inserting yourself into an extremely complex conflict, assessing who “the good guys” are, and increasing their power vis-a-vis their rivals, is an intensely fraught act which is inevitably going to lead to unintended consequences.

If the Canadian government aims to further divide Iraq and Syria and promote the vicious cycle of violence there, they could do no better than exactly what they say they intend to do.

As with so many major policy initiatives, Trudeau has been short on the details in this area. Already, pressure is mounting on his government to follow through on their promise to end Canada’s combat mission in Iraq and Syria. How he and his government handle this early test, and in what direction they choose to send the military, will tell us a lot about where exactly his priorities lie – with appeasing the Americans and being a Good Ally, or with doing the right thing and refusing to help perpetuate the cycle of violence which is tearing the region apart.

National Security Sunday is a weekly series examining Canada’s military-intelligence-arms-industrial complex, and is one day late this week because reasons. You can contact me at matt@thealfalfafield.com, or leave a comment below.