Update on the ongoing Nuttall-Korody trial 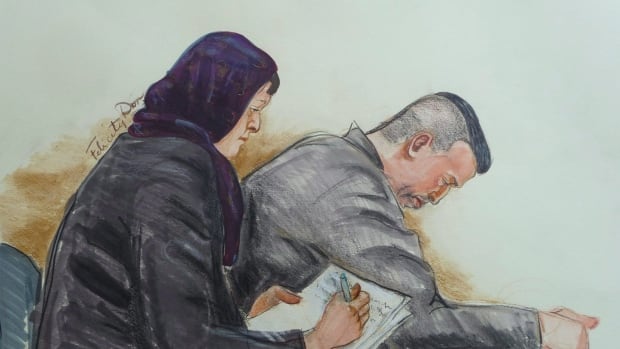 As regular readers of The Alfalfafield will know, I’ve been closely following the ongoing trial of John Nuttall and Amanda Korody, two now-convicted terrorists who contend that they were entrapped into a plot by their handlers in the RCMP.

The pair were poor ex-heroin addicts living on welfare who had recently converted to Islam when Nuttall encountered an undercover CSIS agent provocateur at his local mosque. Alarmed at the agent’s extreme behaviour, Nuttall reported him to the authorities – ironically, to CSIS itself. It’s unclear how this initial contact with law enforcement metastasized into a massive undercover RCMP operation, but Nuttall’s attorney, Marilyn Sandford insists that the two agencies cooperated, as they are empowered to do under the RCMP’s INSET program.

Unfortunately, no court can compel CSIS to turn over any documentation it may have on the matter, and Sandford suggests that CSIS may have deliberately avoided sharing anything in writing with the Mounties in order to avoid the court disclosure process.

Regardless, Nuttall and his partner soon found themselves entangled in an elaborate plot. Upon meeting somebody who presented himself as a jihadist, Nuttall boastfully claimed that he was plotting a terrorist attack. The only problem for the Mounties was that he was entirely incapable of formulating or executing any kind of feasible plan.

His early schemes involved building a missile and launching it at Seattle (which he mistakenly believed was a mere thirty kilometres away from Vancouver) and hijacking a nuclear submarine. As far as I’ve been able to figure from the media reporting on the trial, neither Nuttall nor Korody had invested any time or effort into pursuing any kind of plot prior to their being contacted by undercover RCMP officers.

Indeed, even after their handler (and an ever-growing web of extras) got them to agree to engage in a plot, he found it extremely difficult to even get them to put down the bong, turn off their video games, and leave their dingy basement apartment.

When they persisted in fantasizing about unachievable schemes, their handlers repeatedly encouraged them to think more practically, and specifically urged them to use a pressure cooker bomb on multiple occasions. The RCMP paid for the two to have a weekend getaway to Kelowna, where undercover Mounties taught them how to use C-4 (a plastic explosive) and how to build a pressure cooker bomb. The RCMP pushed for a July 1st, 2013 attack date and pushed for the British Columbia legislative buildings in Victoria as a target. The hapless pair’s handlers even threatened them – Nuttall says he feared al Qaeda operatives would kill him if he didn’t follow through on what he perceived to be as orders to launch an attack.

In the end, after devoting two hundred and forty officers and countless thousands of hours to the case, the RCMP was successfully able to get them to plant inoperative pressure cooker “bombs” in advance of a Canada Day celebration in Victoria. Then they were able to swoop in and arrest the pair, winning widespread praise from a pliant media.

Over the course of the pair’s trial, however, the extreme extent of the RCMP’s involvement in every stage of the plot has become obvious. While Nuttall and Korody were found guilty of terrorist offences earlier this year, their trial continues as a B.C. Supreme Court judge seeks to determine whether they were indeed entrapped; if it’s determined that they were, then the conviction will be overturned.

It’s in this context that we’ve entered a baffling media blackout of the trial.

Throughout the spring and summer, there were widespread mainstream media updates of major developments, dramatic testimony, and legal theories. The trial went on hiatus for the last few months, and now that it’s back in session, the flow of information has slowed to a parched trickle.

The only coverage since the trial resumed retreads old ground. Korody’s lawyer, Mark Jette, questioned Staff Sgt. Vaz Kassam of the RCMP before the trial adjourned for the summer. Kassam, who was brought in as the operation’s lead investigator a mere seven days before the plot was executed, testified at that time regarding his knowledge (or lack thereof) of various factors at play, including whether or not he knew that Nuttall felt his life was in danger if he didn’t carry out the plot (he says he didn’t).

On October 19, with the trial back in session, that line of questioning resumed, with Jette now interrogating Insp. Stephen Corcoran, a Mountie further up the chain of command, on why Kassam was brought in so late in the operation:

“Did he ever tell you that he essentially wanted to bring in Kassam because he thought Kassam could close this thing down — in other words, he would be his closer?” asked Korody’s lawyer Mark Jette about the operation commander’s decision.

“I don’t know in that sense, using those exact words,” said Corcoran. “But in that spirit: yes.”

Now, bear in mind here that the RCMP had invested a massive amount of person-power and time and money into this operation, and at this point it seemed to all be going sideways. Kassam testified that when he took over on June 24, 2013, other officers involved in the operation were frustrated that it didn’t seem to be moving forward at all. And you can easily imagine that all up the chain of command there was a mounting sense of panic.

The Mounties, don’t forget, had devoted two hundred and forty officers to this operation at a time when they were being “forced” to cut costs and staffing in other departments, including financial crime and organized crime. My take is that they figured success with their INSET operations would lead to boosted fundings, a gamble which paid off earlier this year when Prime Minister Harper tossed some cash their way after they arrested ten Montreal teenagers who were allegedly attempting to travel to Syria.

But if Nuttall and Korody decided to walk, they’d be left with literally nothing to show for all their time and effort. So they brought in Kassam – a guy who they believed could get the deal done.

Which he did, of course, and I’m sure there were congratulations all round at RCMP headquarters that Canada Day.

To get there, he had to make some big promises, as Corcoran testified:

Jette asked Corcoran about the operation’s insistence on ensuring Nuttall and Korody believed the bomb plot was not a martyrdom mission — that an escape plane had been chartered, that fake passports were in the works and that medication would be provided for the methadone-dependent pair.

“You understood that what the essence of what they were being told is that, ‘You will get away and you will survive’?” asked Jette.

He testified he was not aware Korody had expressed a strong desire to get off drugs and that the investigation’s principal undercover officer, whose name is protected by a publication ban, promised to help her to get clean and to take care of her following the getaway if she went into withdrawal.

The promises went far beyond just the ones outlined here. Just have a look at this doozy of an example, revealed during the course of the trial:

As her husband writes out a list of supplies needed to stage a terrorist attack in Victoria, Amanda Korody presses an undercover officer to find someone to look after the couple’s cat after they are gone.

“(She’s) a beautiful cat, wonderful personality, but obviously under the circumstances we … need to find someone who will care for her,” says the accused B.C. terrorist in a covert police recording made in early May 2013 and played Wednesday before a B.C. Supreme Court jury.

“Preferably a Muslim,” adds Korody’s partner and co-accused, John Nuttall, prompting the undercover officer to promise he will track down a suitable caretaker.

(The vegan in me wonders every time I come across this quote what ever happened to that cat. It probably wound up in a shelter, poor thing.)

Here, we get a tantalizing glimpse into the slow procedural crawl of the entrapment phase of the trial. And then?

Then nothing. The quoted article, posted October 20, is the last original reporting I’ve been able to find anywhere on the Internet about the trial. I know that it’s ongoing – I even know what courtroom it’s happening in! – but it seems that the media has completely lost all interest in this fascinating and revealing case.

No doubt they’ll come back around in the event of any high-profile testimony, or if a verdict is reached. But in the meanwhile, a high-profile courtroom investigation into exactly how the RCMP manipulated, pressured, and wheedled this pair into committing to a terrorist attack is going unexamined and unreported, and that’s all of our loss.

I have been trying to follow this trial and also find that news coverage has completely disappeared. Is there a media blackout? If so why?

Honestly, I’m not sure what’s going on here. The court website I link in the article also has a full list of publication bans, and this trial isn’t included on it, so my best guess is that media interest has just waned. Even so, that’s odd, because in earlier phases of the trial there were regular updates on what was going on!