Open letter to Arif Virani, my Member of Parliament, on the TPP 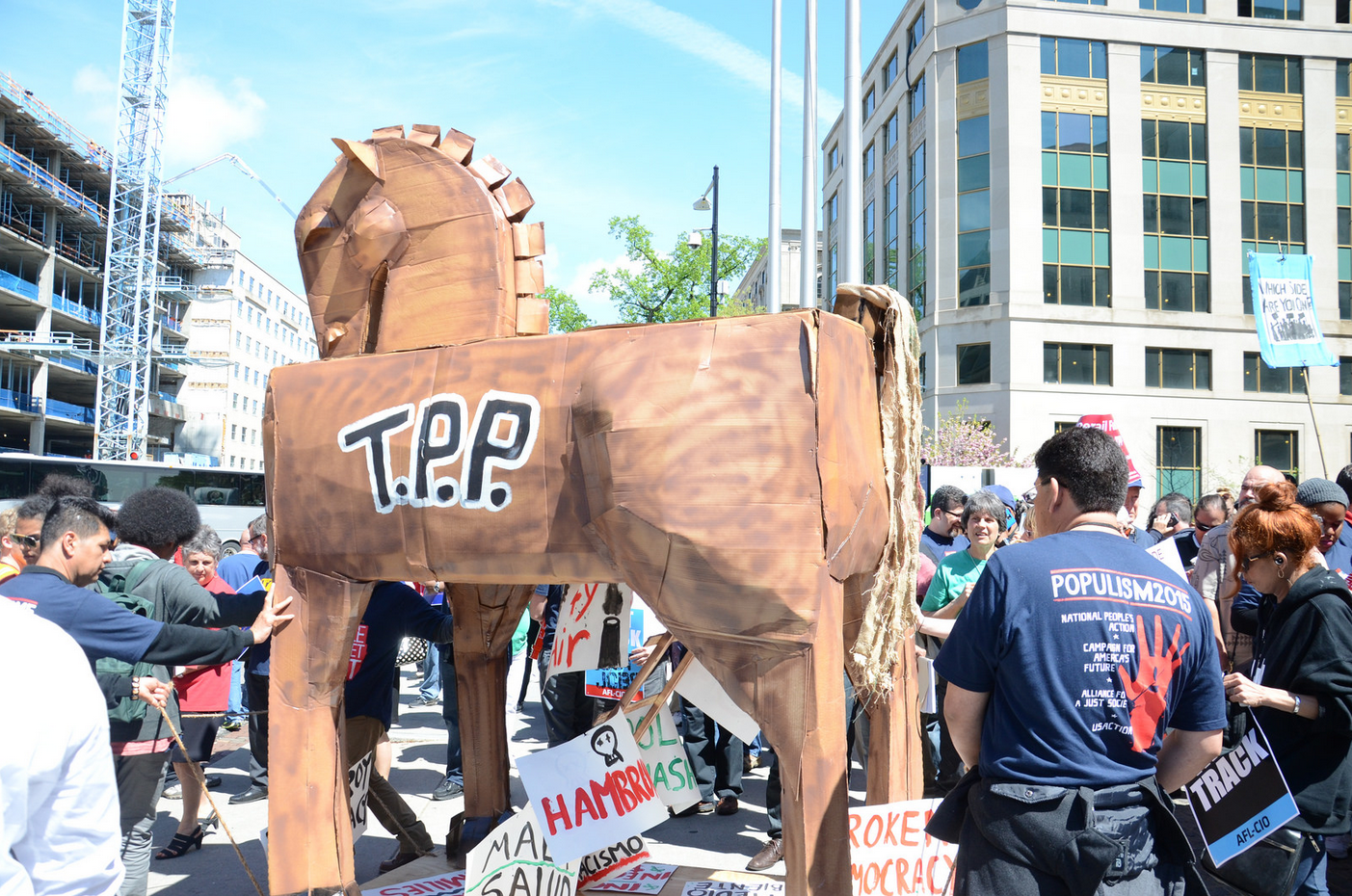 Image description: A mock “Trojan Horse” with the letters “T.P.P.” written on it is at the centre of a protest scene. Many people are standing around holding signs referring to the TPP, trade, and Fast Track. (Image credit: AFGE/Flickr)

Readers: I’ve finally done something I’ve been meaning to do for quite a while – I wrote a letter to my Member of Parliament, Arif Virani, about the Trans-Pacific Partnership. which I’ve reprinted in full below. (I also CC’d this letter to Minister of International Trade Chrystia Freeland and to Prime Minister Justin Trudeau.)

Now is the time to be vocal about this atrocious deal. I’d like to urge everybody who reads this to get in touch with their MP about this issue. Unfortunately, the TPP’s approval ultimately comes down to a vote in the House of Commons, so this is one of the most direct ways you can make your opposition to the TPP clear. If you’d like, you can feel free to copy directly from my letter to Mr Virani.

Regular readers of this blog will know that I feel there’s a much more radical critique to be made of the TPP, but I’m also a big believer in speaking to your audience, and I think that people across the political spectrum have good reasons to oppose this dreadful deal, so in my letter I tried to speak primarily to the concerns that many moderates have expressed.

If you’re uncertain who your Member of Parliament is or how to contact them, you can find that information here.)

First of all, congratulations on your victory in last October’s election. As the new Member of Parliament for Parkdale-High Park, you have the opportunity to represent a uniquely diverse community, and in that endeavour, I wish you nothing but the best.

It’s come to my attention that your government is conducting public consultations on the Trans-Pacific Partnership. I’m sure that you met with thousands of people over the course of your campaign, so I doubt you’ll remember, but you and I had an opportunity to speak about exactly this subject when you knocked on my door in a Jameson Avenue apartment building in late July of last year.

At that time, the TPP was far from the headline issue it is today, and I got the impression that you hadn’t been hearing much about it in the course of your door-knocking. And, to be fair, given the secretive negotiations and the uncertainty surrounding the actual content of the deal, at that time your party’s position was, essentially, “Let’s wait and see”.

Well, now that we have seen exactly what’s in the TPP, it’s time for the Liberal Party to choose sides, and you have turned to the people to see what our opinions are. I gave you my opinion last July, and I’d like to reiterate it today: Canada must reject this toxic deal, as it poses a significant threat to our environment, our economy, and even our sovereignty. Furthermore, the TPP would undercut the Liberal Party’s ability to follow through on many of their key campaign promises and to live up to their foundational principles.

For instance, the centrepiece of your party’s election campaign, its central motivation and overarching goal, was “a new plan for a strong middle class“. Strengthening the middle class was a theme that Prime Minister Justin Trudeau stressed repeatedly throughout last year’s election, and, given your party’s decisive victory, it must have been a theme which resonated with the Canadian electorate.

It is also a goal which is squarely contradicted by the Trans-Pacific Partnership. A recent study by Tufts University’s Global Development and Environment Institute estimates that Canada would lose roughly 58 000 jobs as a result of ratifying the TPP – and it must be stressed that the jobs lost would be well-paying, middle-class jobs. Furthermore, the study projects that the deal would lead to an exacerbation of income inequality in all member nations – that is, the benefits of the deal would accrue to the wealthy and to corporations.

This is hard to reconcile with your party’s proposed tax increases on the “top 1%”. The adoption by the Liberal Party of this Occupy-movement slogan was interpreted by many voters as signifying an intention to seriously address issues of income inequality. This will be impossible if the TPP is brought into force, as major provisions of the treaty entrench and expand the powers of the very wealthy and of corporations.

No single part of the TPP has drawn more criticism than its investor-state dispute settlement (ISDS) provisions. These provisions, which are an expansion on ISDS provisions included in NAFTA and other trade treaties, allow for foreign corporations to sue the Canadian government for any supposedly unfair barriers to trade. These provisions are now being extended to an additional nine countries, and as many of these countries are home to corporations which already invest or are likely to invest in Canada, we would be opening ourselves up to a plethora of new ISDS challenges by signing on to the TPP.

Canada has been the most-sued nation under NAFTA’s ISDS provisions, and those lawsuits have, on multiple occasions, blocked attempts by the Canadian government to impose health or environmental regulations which would have been beneficial to the public. To give but a few examples, the government of Canada has been forced to pay damages to a foreign chemical corporation after banning one of the company’s products, a known neurotoxin, from being added to gasoline. An ongoing $250-million lawsuit against the government of Quebec for its popular ban on hydraulic fracturing (fracking) shows that ISDS provisions have the potential to undercut both public health and sovereignty.

Prime Minister Trudeau inspired those who want to see Canada take a leading role in the fight against climate change last December at the COP21 summit in Paris when he pushed for an ambitious climate target of no more than 1.5°C in warming. But given the ability of corporations to challenge environmental laws and regulations under the TPP’s ISDS provisions, it’s difficult to see how such a goal would be compatible with this corporate-friendly agreement.

There are many additional reasons to be concerned that the TPP will work against your party’s promises and priorities. Prime Minister Trudeau promised to revitalize the CBC during last year’s election, a promise which was well-received by millions of Canadians frustrated with the poor treatment our public broadcaster received at the hands of the previous government. However, state-owned enterprises like the CBC and Canada Post may be vulnerable under the TPP.

And as for the Prime Minister’s recent quip in Davos about Canada’s resourcefulness, the TPP will act to limit that as well. The intellectual property provisions of the deal have been widely condemned. In essence, the IP provisions of the deal would benefit powerful patent and copyright holders, like pharmaceutical companies and media conglomerates, while unnecessarily constraining innovation and creativity. This will have major costs, not just to the economy, but to people’s health and well-being.

Speaking of economic benefits, they look to be sorely lacking. Prime Minister Trudeau’s stated position on the TPP thus far has been that the Liberal Party is a “pro-trade party“, stressing the belief that trade brings benefits to the Canadian economy. But, by any meaningful definition, the TPP is not a trade deal. First and foremost, it’s a deal regarding regulations and corporate governance.

There have been a few studies on what kind of growth member nations can expect from ratifying the TPP, and in even the most optimistic scenario, laid out by the World Bank, Canada can expect to see a mere additional 0.12% increase in GDP per year over the next fifteen years. In the Tufts University study I referred to above, it’s as low as 0.028% per year. For a deal of the scope and complexity of the TPP, this is clearly underwhelming, and indicative of the fact that the main priority of this deal is not trade, but changes to national regulation.

And, as I have detailed, these changes in regulation will be in favour of wealthy and powerful corporations, and will come at the expense of middle-class jobs, public health, our environment, creativity and innovation, and perhaps even beloved national institutions like the CBC.

In short, to support the Trans-Pacific Partnership would be to undercut your party’s main platform planks and to subject the people of Canada to job losses, erosion of health and environmental protections, and a substantial loss of control over our own affairs. Given the extremely meagre gains to economic growth that are projected to result from the TPP, this is clearly a bad deal for Canada and must be opposed in the strongest terms by you and your party.